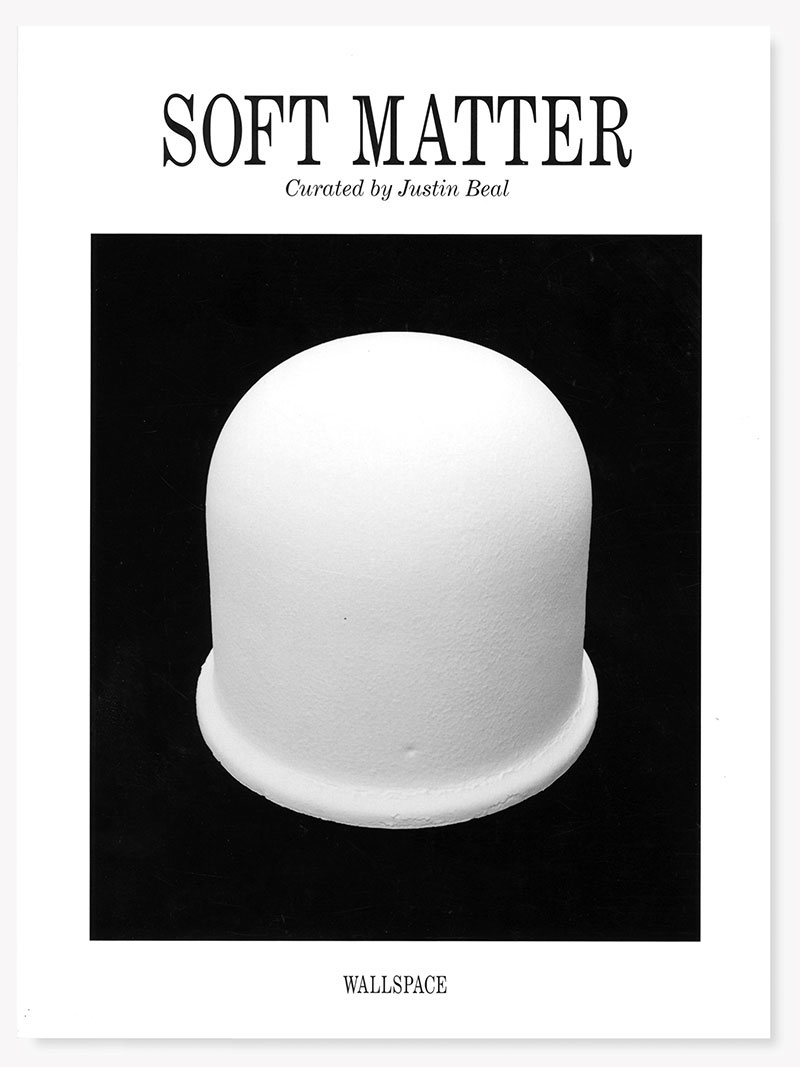 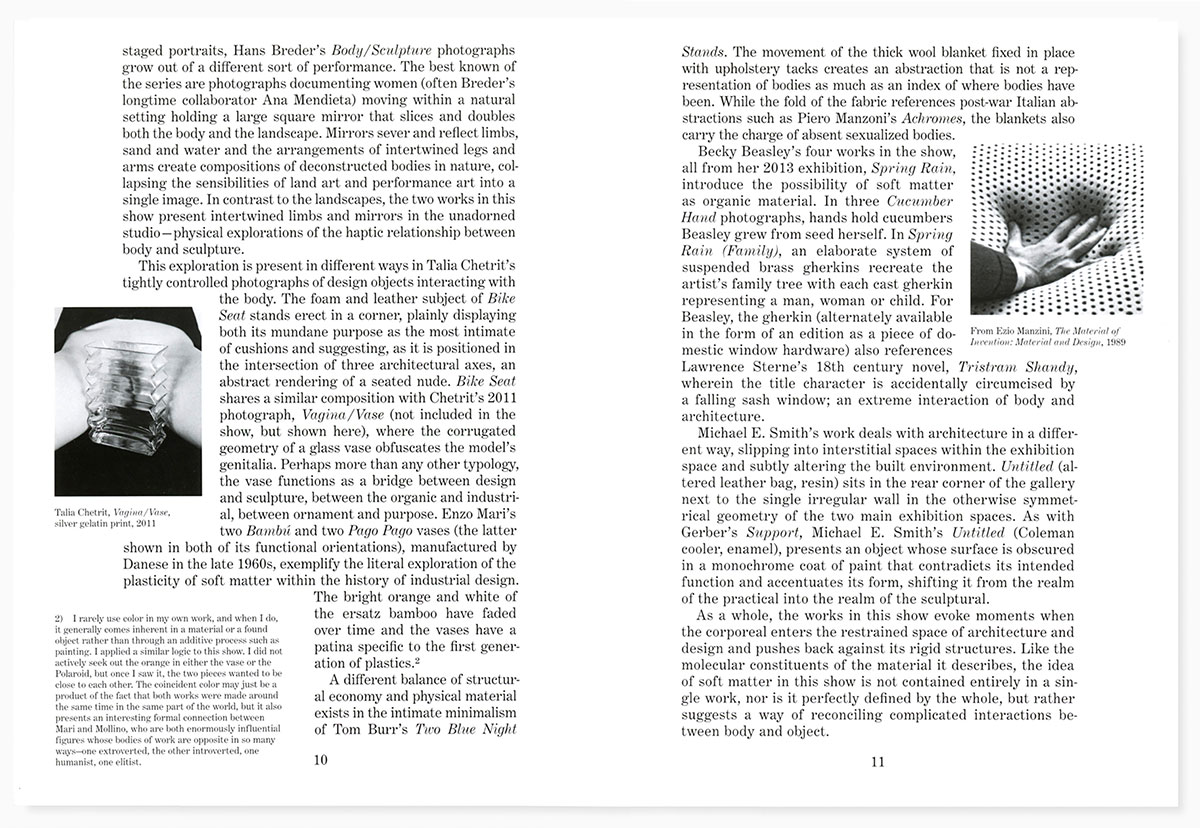 The title for this show, Soft Matter, is borrowed from a classification of material including organic matter, plastics and foams used as a curatorial subcategory in Ezio Manzini’s 1989 survey of postmodern design, The Material of Invention: Material and Design. Manzini takes the term from French physicist Pierre-Gilles de Gelles, who used it to describe matter, both biological and synthetic, which self-organizes into physical structures whose behavior cannot be predicted by their microscopic constituents or their macroscopic whole.* This grouping of artwork expands the notion of soft matter to include the unconventional manipulation of rigid architectural forms, the indexical relationship between body and furniture and the physical presence of objects that have the plasticity to shift between disciplines.

Though my take on soft matter is informed by certain touchstones in the history of sculpture—Marcel Duchamp’s Wedge of Chastity or Man Ray’s photograph of a woman holding Alberto Giacometti’s Disagreeable Object–I was thinking predominantly about contemporary art in relationship to the history of design while I was putting it together. The show was conceived with the premise that best artist-curated shows begin with the work that the curator cares about and the artists who influence his or her own practice and thinking and, as such, constitute something like a work in their own right. The exhibition includes objects by Enzo Mari, Gaylen Gerber, Tom Burr, Archizoom Associati, Becky Beasley and Michael E. Smith, as well as photographs by Carlo Mollino, Luisa Lambri, Talia Chetrit, Becky Beasley and Hans Breder. The Enzo Mari text at the end of this book, to the best of my knowledge, is the first English translation of the opening chapter of Mari’s 2001 book Progetto e Passione—a text about the making of objects that has as much to say about the production of art as it does about the production of design—is, in a sense, the final work in the show.

The research for the exhibition began with an image in the margin of Andrea Branzi’s book, The Hot House: Italian New Wave Design, that pictured Archizoom’s iconic Mies chair unassembled on the studio floor. The chair is comprised of two chrome triangles, a chrome cross bar, a large sheet of Pirelli rubber and a pony skin pillow (the illuminated chrome ottoman, which is included in this exhibition, is not pictured in this photograph). While its material has something in common with its namesake, the sharp geometry and flat plane of rubber clearly privilege form over function. The photograph of the components of the chair scattered on the floor suggest an alternate arrangement, as a dispersal of constituent parts more reminiscent of a sculpture than of a piece of furniture.

The fact that three objects in the show have direct connections to a specific moment in Italian postwar design is not a coincidence. The concept of soft matter and the anti-functionalist experiments of that moment are closely aligned. The backlash against the conventions of modernism and the embrace of new material created a unique generation of designers. In her text for the exhibition The Plastics Age: from Modernity to Post-Modernity, curator Penny Sparke notes how, “the use of polyethylene to play games with hardness and softness proved a vital strategy in the Italian movement… which was directly committed the role of objects as metaphors of liberation and used them extensively as a means of renewing the language of form”. These materials—which were becoming widely available at the time and carried a cultural resonance that had less to do with what they were than with what they were not—precipitated a shift from the hard geometry of materials like steel and glass towards the corporeal and malleable forms more easily achieved with plastics, introducing a post-modern approach to object-making that has had an enormous influence on contemporary sculpture.

The work in the show that is closest to the proper physical definition of soft matter is, in a sense, two works in one. Gaylen Gerber’s Support, appropriates the expanded polyurethane Puffo seat designed by the Italian collective Gruppo Strum (Giorgio Cerretti, Pietro Derossi, Carlo Gianmarco, Riccardo Rosso and Maurizio Vogliazzo). Gerber shifts the Puffo into his own monochromatic lexicon with a coat of white enamel that encases the original polyurethane chair in a blank shell, rendering it inflexible and unusable as a chair, but undeniably present as an artifact and a relic of a specific cultural moment.

Luisa Lambri’s three photographs capture temporal experiences of iconic late-modernist architecture through her own methodical gaze. The pair of photographs of Erich Mendelsohn and Serge Chermayeff’s De La Warr Pavilion, condense the experience of the sprawling building into two views of the curving stair that rises between floors. This maneuver of architectural synecdoche that is so central to Lambri’s work isolates the detail that embodies the entirety of an architectural work, or perhaps more specifically, the entirety of the viewer’s experience of that work. Lambri’s third photograph in the show is an image of the interlocking circular windows of Carlo Scarpa’s “viewing device” for the Brion Cemetery, a detail that captures, “the synthesis of structural economy and ergonomic form” that Kenneth Frampton describes in his seminal essay "Carlo Scarpa and the Adoration of the Joint." It is hard to imagine a better subject for Lambri’s project than Scarpa, who is so widely admired for his mastery of architectural detail.  As with Gerber’s Support, both the piece itself and the work contained within the piece are integral to the exhibition as a whole.

Carlo Mollino was a different kind of architect and the relatively small amount of furniture and buildings he completed are defined by intricate detail and sensuous curves (the female body was regularly referenced as a generative form in the notes and sketches that accompany these designs). Over the course of a decade beginning in the late sixties, he transformed his own home in the hills above Turin, the Villa Zaira, into an elaborate and enigmatic set for hundreds of Polaroids of models and prostitutes. In this sense, while he was working in temporal and geographic proximity to Italian industrial designers, his practice was quite unlike that of his contemporaries in this show. In stark contrast to the accessibility and democracy of the radical architecture collectives, Mollino’s more elitist practice was shrouded in secrecy and the majority of the Polaroids were not seen until they were found in the mid-eighties. In contrast to Mollino’s elaborately staged portraits, Hans Breder’s Body/Sculpture photographs grow out of a different sort of performance. The best known of the series are photographs documenting women (often Breder’s longtime collaborator Ana Mendieta) moving within a natural setting holding a large square mirror that slices and doubles both the body and the landscape. Mirrors sever and reflect limbs, sand and water and the arrangements of intertwined legs and arms create compositions of deconstructed bodies in nature, collapsing the sensibilities of land art and performance art into a single image. In contrast to the landscapes, the two works in this show present intertwined limbs and mirrors in the unadorned studio—physical explorations of the haptic relationship between body and sculpture.

This exploration is present in different ways in Talia Chetrit’s tightly controlled photographs of design objects interacting with the body. The foam and leather subject of Bike Seat stands erect in a corner, plainly displaying both its mundane purpose as the most intimate of cushions and suggesting, as it is positioned in the intersection of three architectural axes, an abstract rendering of a seated nude. Bike Seat shares a similar composition with Chetrit’s 2011 photograph, Vagina/Vase (not included in the show, but shown here), where the corrugated geometry of a glass vase obfuscates the model’s genitalia. Perhaps more than any other typology, the vase functions as a bridge between design and sculpture, between the organic and industrial, between ornament and purpose. Enzo Mari’s two Bambú and two Pago-Pago vases (the latter shown in both of its functional orientations), manufactured by Danese in the late 1960’s, exemplify the literal exploration of the plasticity of soft matter within the history of industrial design. The bright orange and white of the ersatz bamboo have faded over time and the vases have a patina specific to the first generation of plastics.

A different balance of structural economy and physical material exists in the intimate minimalism of Tom Burr’s Two Blue Night Stands. The movement of the thick wool blanket fixed in place with upholstery tacks creates an abstraction that is not a representation of bodies as much as an index of where bodies have been. While the fold of the fabric references post-war Italian abstractions such as Piero Manzoni’s Achromes, the blankets also carry the charge of absent sexualized bodies.

Becky Beasley’s four works in the show, both from her 2013 exhibition, Spring Rain introduce the possibility of soft matter as organic material. In three Cucumber Hand photographs, hands hold cucumbers Beasley grew from seed herself. In Spring Rain (Family), an elaborate system of suspended brass gherkins recreate the artist’s family tree with each cast gherkin representing a man, woman or child. For Beasley, the gherkin (alternately available in the form of an edition as piece of domestic window hardware) also references Lawrence Sterne’s 18th century novel, Tristram Shandy, wherein the title character is accidentally circumcised by a falling sash window; an extreme interaction of body and architecture.

Michael E. Smith’s work deals with architecture in a different way, slipping into interstitial spaces within the exhibition space and subtly altering the built environment. Untitled (altered leather bag, resin) sits in the rear corner of the gallery next to the single irregular wall in the otherwise symmetrical geometry of the two main exhibition spaces. As with Gerber’s Support, Michael E Smith’s Untitled (Coleman cooler, enamel), presents and object whose surface is obscured in a monochrome coat of paint that contradicts its intended function and accentuates its form, shifting it from the realm of the practical into the realm of the sculptural.

As a whole, the works in this show evoke moments when the corporeal enters the restrained space of architecture and design and pushes back against its rigid structures. Like the molecular constituents of the material it describes, the idea of soft matter in this show is not contained entirely in a single work, nor is it perfectly defined by the whole, but rather suggests a way of reconciling complicated interactions between body and object.

*A more complete definition of soft matter: “Interesting behaviors arise from soft matter in ways that cannot be predicted, or are difficult to predict, directly from its atomic or molecular constituents. This is often because soft matter self-organizes into mesoscopic physical structures that are much larger than the microscopic scale (the arrangement of atoms and molecules), and yet are much smaller than the macroscopic (overall) scale of the material. The properties and interactions of these mesoscopic structures may determine the macroscopic behavior of the material. For example, the turbulent vortices that naturally occur within a flowing liquid are much smaller than the overall quantity of liquid and yet much larger than its individual molecules, and the emergence of these vortices control the overall flowing behavior of the material. Also, the bubbles that comprise a foam are mesoscopic because they individually consist of a vast number of molecules, and yet the foam itself consists of a great number of these bubbles, and the overall mechanical stiffness of the foam emerges from the combined interactions of the bubbles."